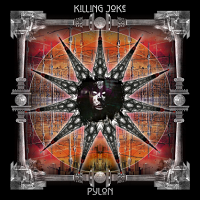 Sufficient evidence would indicate a band now past its 35th year of existence (Killing Joke formed in 1978) shouldn’t sound this vital and/or pulsating. We’re getting a lot of old-timers in the twilight of their careers, releasing albums that while dutiful and true to their sound, hardly indicate any notion of pushing ahead. (Of course, if any of these bands were to try something new, then shame on them!) For London’s Killing Joke, though, their long-standing inability to stay in one sonic spot has served them well, so much so that Pylon sounds nothing like the industrious, seedy self-titled debut, or the unheralded early 90s gem Extremities, Dirt, and Various Repressed Emotions.

Jaz Coleman’s booming, fluid vocals still maintain all sorts of poise. Whether he’s in the storm of a angular alt-rocker (“Autonomous Zone”) or giving it a go with big, jangly melodic rock (“Big Buzz”), he’s always worth a handful of hummable moments. And as the band’s previous history goes, Coleman will pepper you with a political and free-thinking edge that is boils lyric writing down to a craft. (See: “Dawn of the Hive” and “New Cold War,” in particular.)

The metallic sheen the band has brandished so well over their career gets a workout on “Delete,” a classic robo-rocker that the Goth gang would love, and to some degree, the metal crowd the band has so wisely kept at arm’s length as well. But the constant symmetry, stirring vocals from Coleman, and the melodic weaves of guitarist Kevin “Geordie” Walker make Pylon another notch in the belt of a true rock/industrial pioneer. There’s just this edge that won’t dull with Killing Joke, and probably won’t until the band calls it a day, which will be when they all croak. Hopefully not any time soon.