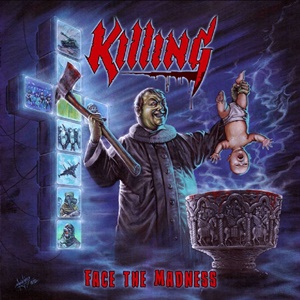 We often idolize what initially grabs us as teenagers – hopeful to churn out something similar when picking up instruments and seriously working at our craft. Such is the case with Danish thrash band Killing, who since 2013 have been carving out their style of uncompromising, unrelenting heavy riffs, energetic tempos, and savage vocals. They’ve released an EP and a single, touring northern Europe and reaching the point of signing to Mighty Music for Face the Madness, the quartet’s debut album. Can these gentlemen develop material that a new generation will cherish, while also adhering to many of the principles that put those original purveyors on the map?

The energy and intensity are instantly identifiable – you get a barrage of crunchy riffs with solid transitions, the right accents for melodic perspective yet an aggressive overtone when it comes to the production, lead breaks, and venomous vocal roar to keep things aligned more in the Slayer, Sodom, and Kreator camps than anything remotely commercial. The evil warble and insane high-pitched cackle from bassist Rasmus Soelberg has the right Mille-esque charm, especially during the simple yet effective chorus for “Don’t Get Mad, Get Evil”. The guitar runs contain a mixture of semi-progressive passages and heads down brutality – check out “See You in Hell” for instance where the Heathen/Artillery-like power charge counters the shredding lead break and massive mid-tempo parade that follows. The straightforward, d-beat nature to “One Last Victim” matches the rabid musical attack, a second half treasure sure to launch bodies from stages all across Denmark, Europe, and beyond. The bookends of the record showcase the relentless and epic sides of the group: “Kill Everyone” obliterating like early Kreator meets Slayer in just over two minutes flat, while “Killed in Action” has a slow burn motion to the arrangement, the calmer guitar lines and quick snare hits giving chase to a militant mid-tempo churning effort, evoking a bit of Metallica into their normal Teutonic influence mix.

Subscribing to a lean nine-song platter at a perfect vinyl length of forty minutes, Killing deserves the accolades they are receiving for their songwriting, performances, and musicianship on display all wrapped up in an ideal thrash explosion. Face the Madness could be the debut thrash record of the year.