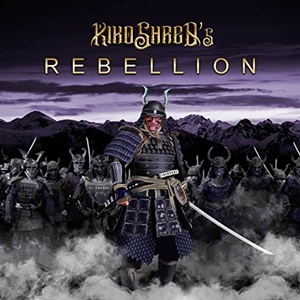 Actively playing in bands for twenty-two years, Kiko Shred set about his own solo career in 2015. Rebellion is the fourth release for Kiko Shred’s Rebellion – a quartet containing solid players of the South American music scene. Displaying a familiar brand of heavy/power metal with neoclassical tendencies, the nine tracks in the main contain fluid displays of heroic interplay, soaring melodies, and plenty of riff muscle and namesake ‘shred’ passages which are ideal for people into Helloween, Dio, Iron Maiden, and Yngwie Malmsteen.

Registering beyond the conventional metal runs into some funky/jazzy-like picking with acoustic enhancement for “Rainbow After the Storm” showcases Kiko’s forward thinking outlook to shape the arrangements individually, even as he can often throw the intricate sweep, tap, or arpeggio-fueled lead break at you. Larger than life hooks and keyboard/guitar harmonies give “Thorn Across My Heart” a Rainbow-esque/older Dio appeal, elevated to a higher level through the magnificent voice of special guest Doogie White on vocals as the mid-tempo climbing appeal channels that throwback 70’s/80’s moment. The flexibility of a rhythm section that can cover speedy, double kick efforts as well as latch onto conventional power/heavy tempos allows Kiko and main vocalist Ed Gadlin plenty of area to rise to the occasion for plenty of heroic action. You’ll get some progressive, off-time nuances in the instrumental “The Hierophant”, while the Iron Maiden meets Angra charge bursts forth from “Mirror” – circular rhythms wrapped around a chorus that brings these ears back to Angels Cry. And for those who enjoy a bit more of melodic, arena hard rock atmosphere, there’s “Voodoo Queen” – something you may expect in a Dokken / early Andi Deris-Helloween context, although Ed occasionally stretches his voice into semi-strained terrain for specific upper notes in the main verses.

You don’t get the chance to hear many guitar-hero oriented offerings in the power/heavy realm like Rebellion these days – so when one with this quality comes down the pike, better grab a hold, process, and enjoy.