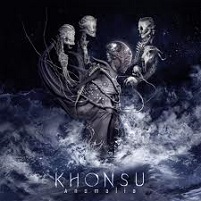 Nepotism isn’t very prevalent in metal, given that, well, there’s room for everybody. And even the slightest of associations seem to work (“So-and-so was an ex member of this and that band,” etc.), yet in the case of Norway’s Khonsu, nepotism works like a charm. You see, main dude S. Gronbech happens to be the brother of Keep of Kalessin guitarist Obsidian C. (real name: Arnt O. Gronbech) and was once a songwriter for KOK. After leaving the fold in 2003, S. Gronbech took his sweet ‘ole time in assembling a band of his own, with the end result being Khonsu, which sees him pair with KOK singer Thebon. There are far worse bands to be associated with, that’s for sure.

At any rate, on their Anomalia debut, Khonsu marries the very visceral black metal sound of Keep of Kalessin with spare electronic and industrial elements. In fact, a lot of ideas sound destined for a KOK album, for the similarities in structure, chords, and not to mention Thebon’s vocals make Khonsu something just short of a junior band. Regardless, there’s a wide swath of complicated, pure-Norwegian riffs unearthed, as S. Gronbech proves himself to be a formidable guitarist in his own right. He certainly has the same knack for interplay between acoustics and precise BM riffing, as heard on opener “In Otherness.”

One is going to have to exert some sort of patience to get through the bulk of the album’s seven tracks, for the shortest number is a poultry five-and-a-half minutes. In spite of the bloated nature of these songs, there’s some memorable moments to be had, most notably on “Darker Days Coming,” which is Thebon’s finest moment, and “Inhuman States,” which matches Keep of Kalessin’s intensity note-for-note, while injecting some spacey guitar bits into the mix. Album closer “Va Shia (Into the Spectral Sphere)” clocks in over 14 minutes, thus giving Gronbech the opportunity to stretch his experimental wings.

At times, Anomalia is a visceral, unrelenting album, while at others, it wallows in the sort of haphazard electronic nonsense that is capable of turning people off. However, Gronbech should have little problem selling

this to the BM masses, who by now, are well-versed in his brother’s nearly unsurpassed approach at placing technical riffs into the context of black metal. This is a much more digestible album than it appears.