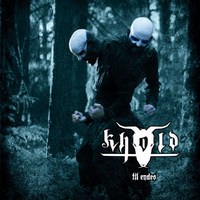 Norway’s black metal scene never fails to impress. Khold uphold and uplift the notorious Norwegian black metal reputation. Keeping it real and raw, they strictly use vocals, two guitars, bass guitar and drums to make music; nothing more, nothing less and nothing that would corrupt a primitive sound. They went old-fashion all the way, musically and materially, and made a statement of that having their outstanding new album, Til Endes, only available for purchase on vinyl (and digital/mp3 obviously).

In order to enhance the cryptic concepts of the songs, all lyrics are poetically and eloquently screamed, growled and/or shrieked in ancient Norwegian. They even translated all the lyrics of their Sepultura cover song from “Troops of Doom” and made it into “Dommens Arme,” pretty much making it their own by doing so. It’s typically wrong to say a cover is better than the original but we can’t deny that here, Khold’s “Dommens Arme” undeniably beats Sepultura’s “Troops of Doom.”

Every song here is addictive as the next. If thrashy battering drums spark you up, check out “Skogens Uye.” If depressive black metal is your thing, listen to the gruesome groan buried in “Ravnestrupe.” The heavy grooves of “Myr” are simply irresistible. With exhilarating variation, “Til Endes” exhibits their range of tempo, rhythm and dynamics. “Hengitt” is a hammering, head-pounding piece that will surely cause one hell of a deadly moshpit if/when played live. What more could we ask for?

Anyone and everyone who has been taken away by even one of Norway’s numerous extreme black metal bands (for example Vreid, 1349, Satyricon) might as well drop to their knees and kiss the grounds of Khold. Til Endes is manifested to be one of the finest albums in the history of black metal. Just goes to show, rock may be dead but as long as we have bands like Khold, genuine black metal remains immortal.

Raw and rough as they are, the clarity of these songs cut like a knife. I can’t say I’ve ever heard black metal as crude, cold and clear as this, not without cheating or shortcuts. This music is real.