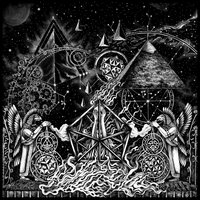 When metal bands push the envelope past the normal accepted genre boundaries, the results can be a wild card. Some times you’re left with brilliant glimpses of something never heard before, like Ved Buens Ende’s Written In Waters, Weakling’s Dead as Dreams, or more recently Oranssi Pazuzu’s Varahtelija. Sure you get mixed reactions from all material like this, but with polarization a true division is created and a line in the sand is drawn. Khanus attempt to give you ritual psychedelic extremity and boundary pushing bravado of the above mentioned acts in the form of new e.p. The Rites of Fire, but come up short with their ritual offering.

The Rites of Fire begins with a repetitive ritual style track called “Womb of the Larger Self” that stretches the two minute mark. I understand it’s supposed to set the stage for darker things to come, but honestly it’s offers little in value to the overall listening experience. Once the first real track “Orgone” begins, you’re properly introduced to Khanus and their avante grade death black magick. “Daughters of Fire” carries on where “Orgone” leaves off, with interesting mind twisting riffs, ritual rhythms and operatic/manic vocals very reminiscent of Attila’s performance on Mayhem’s classic De Mysterious album. Then the e.p. concludes with another three minute ritual piece and the ride is over.

Calling The Rites of Fire a proper e.p. is a bit bothersome as it is very short in my opinion, having a total run time of about 13 minutes or so. The ritual style tracks are alright, but don’t really give a chaos vortex feeling as much as they just kind of take up space at the front and end of this release. I think one more “proper” track would have given The Rites of Fire a more rounded feel as the enjoyable parts here do leave you wondering what else Khanus is capable of. I applaud these Finn’s for taking the path less traveled and when Khanus expand their blackened wings with the two proper tracks I think you get some real hints of something galvanizing. If Khanus hone their craft properly I think their full length could be something special to watch out for.