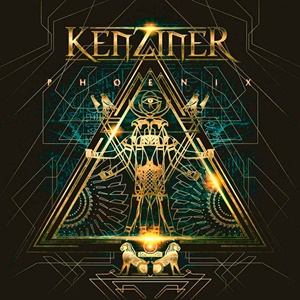 Ardent metalheads probably know Kenziner best for their late 90’s albums with Stephen Fredrick on vocals – who would move on to Firewind shortly thereafter. Guitarist Jarno Keskinen resurrected the outfit in 2012 with new members, and Phoenix is the fourth full-length for the quintet. Continuing in the neoclassical, progressive power metal platform they’ve always been known for, there are two new members between their last record 2014’s The Last Horizon and now – keyboardist Ariel Perchuk and vocalist Peter ‘Zinny’ Zalesky. Let’s press play and see if the quality remains high even with the latest lineup shuffles.

The tracks contain a bevy of intricate syncopated guitar/keyboard runs along with some multi-octave, high power melodies while the rhythm section holds down the fort and is up to the challenge with energy and transitional changes on the fly. But what’s well appreciated from this scribe’s perspective is the ability of the musicians to drill deeper into focused arrangements and tighter verse/chorus structures – most of the material sitting in the four-minute zone, with “Phoenix Rising” the longest cut at 5:15. You know that you’ll get plenty of Yngwie Malmsteen meets Symphony X/ Straovarius-like shred courtesy of Jarno and Ariel as “Shadow of the Moon” and “Eye of Horus” illustrate – but there’s also dynamic balance on the back half with more power anthem or metal outings that contain killer main hooks such as “Curse of the Pharaoh” and the Dio-esque commercial-oriented “To Hell and Back”. Peter’s depth and breadth of range comes into play on the quieter closing ballad “The Miracle” – he has a lot of qualities similar to Johnny Gioeli (Axel Rudi Pell) and Russell Allen which serve the band very well. Jarno has developed an ability to reign in those musicianship-filled breaks with proper, solid base mechanics as far as the melodies, hooks, and main riffs – which makes the material very ease to process but also want to engage with again and again.

Phoenix will go down well for those who love Symphony X, Firewind, and other offshoots while also keeping the metal side of things in mind. Here’s hoping the next record can come out quicker than six years though.