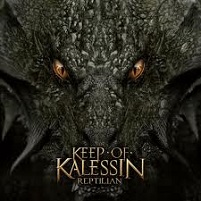 In line with Watain and Dark Fortress to supplant the old guard of black metal, Norway’s Keep of Kalessin haven’t as much made a step forward with Reptilian as a lateral move. Their Kolussus effort from 2008 was the type of raw, visceral, riff-laden affair that should have placed the band much higher in BM circles, yet many missed the boat, which is a bit hard to explain considering ripping songs like “Against the Gods” and “The Mark of Power” are. Perhaps cognizant of this, KOK returns with Reptilian, which looks to further the approach of Kolussus and does so in spots, with some questionable moves to boot.

At first glance, the production here is much more expansive, improving upon the very live, but again, quite raw feel of Kolussus. Having Daniel Bergstrand (In Flames, Meshuggah) onboard proved to be a wise move, as drummer Vyl’s machine-gun blasts sound more in-your-face than before. Mainman/guitarist Obsidian is up to his usual tricks, boasting an assortment of jagged, sideways riffing that while definitely black metal-tinged, has the bite of classic-era Megadeth. The dude can definitely riff-it-up, placing him in the exclusive riff-realm with Immortal’s Abbath and Enslaved’s Ivar Bjornson, just check out the opening barrage of “The Awakening” and “Judgment.”

Where Reptilian takes a hit is with “Dragontower,” a blatant attempt at commercial black metal if there ever was one. One can see where the band is headed with this one (the song was placed in the Eurovision song contest), but it sticks out like a sore thumb. Some will point to singer Thebon’s snarled clean vocals or the not-very-militaristic chorus; either way, the song flies directly in the face of otherwise enjoyable numbers like “The Divine Land” and throttling epic “Reptilian Majesty.” In fact, “Dragontower” is a very noticeable blip that traditional BM pundits may not be able to look past. Such is life.

Even with “Dragontower” in tow, Keep of Kalessin remains a very enticing black metal prospect. We’re not sure how Reptilian will land, frankly, as it doesn’t appear to have the breadth to pull in from all sides of the BM fence. However, few guitarists have a riff arsenal like Obsidian C., and the vastly underrated drumming of Vyl proves to be the band’s strongest facet. Soon all of this will translate into something grander.