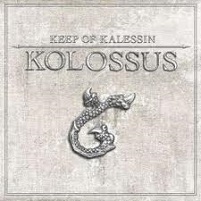 Fresh off a stellar stint on Dimmu Borgir’s The Invaluable Darkness Pt II tour, Norwegian trad black metallars Keep of Kalessin appear to be poised the upper-echelon of modern black metal with Kolossus. The follow-up to 2005’s tightly-wound Armada, Kolossus is every bit of a live recording one could come by, with the band opting to do live takes without the benefit of a click or Pro-Tools, a move daring enough to make anyone’s corpse paint run.

Led by guitarist Obsidian C. (also a touring member of Satryicon), Keep of Kalessin is perhaps one of the more riff-oriented BM bands

, with Mr. C. rattling off an array of savory, spiky BM riffage with no end in sight. Some of C.’s more choice riff selections come in the form of the slo-mo prologue of “Against the Gods” or the hard-lined attack of “A New Empire’s Birth,” boasting a chord progression oddly similar to that of Sentenced’s “Nepenthe.”

The penchant for riff-based jams is none more evident during the ferocious blast portion of “Escape the Union,” where C. alternates between dazzling speed-picking and caustic chord combos. Even the wildcard number on the album, “The Mark of Power” is laced with memorable guitar

action, as C. opts for more single-picked notes that give Kolossus a new realm in which to operate.

Outside of Satyricon, probably the forthcoming Immortal album, and maybe 1349, you’re not going to find this level of pure, primal BM on a large label. Our BM senses have been dulled by symphonic and basement BM overload, so it’s no surprise that Keep of Kalessin are receiving such high marks – no band is working this well in between the confines of second and third-wave BM.