Katatonia – The Fall of Hearts (Peaceville) 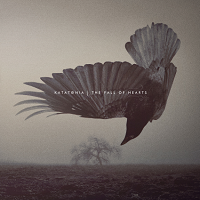 The songwriting pair of Nystrom and Renkse appear to be in a longer song kind of mood, which is in contrast to the short, tight constructs that were all over their last four albums. So with elongated structures comes more room for textures, which is found on opener “Takeover,” which blows the lid off with a stirring chorus. “Serein” gets the quick nod as the album’s best song, an immediate, pensive, no-sleep-at-all jaunt that compiles a bevy of whipping melodies. But from there, the solemn underbelly joins the fray, most notably on the excellent “Old Heart Falls,” “Residual,” and the siren-leading “Shifts.”

Yes, the heavier, often overlooked components of Katatonia are present, as so found on “Sanction” and “Serac.” (Let’s not sleep on closer “Passer,” either.) Mr. Renkse, who to this scribe is one of the top three best crooners in metal/hard rock, is his usual contemplative, elusive self, at his most distant on “Pale Flag,” which in a way, takes off from the band’s Sanctitude effort from a year ago.