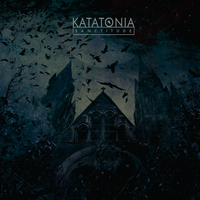 Oftentimes, live albums are viewed as a bonus. Not really viewed with the same critical lens as studio releases, and really only essential for the “die-hard” fans that collect everything that the band in question releases. Leave it to Katatonia to offer up such a remarkably compelling and essential live album. Recorded at London’s Union Chapel during their “Unplugged & Reworked” tour last year, Sanctitude is special because of the way that Katatonia re-arranged their old songs to fit into this stripped-down, acoustic set.

Of course, there are several cuts from Dethroned & Uncrowned, which is what brought about the unplugged tour to begin with. The D&U tracks sound fantastic in the live setting, but the real treat is the reworked songs from the band’s back catalogue. The wow factor jumps in with the first track, “In the White,” a personal favorite from The Great Cold Distance. Some of the song selections are the more obvious ones, such as “Omerta,” “Unfurl,” and “One Year from Now,” which were pretty stripped down to begin with. But what they do with an old track like “Gone” (reaching back to Discouraged Ones) is downright incredible. Compare it with the original and it becomes even more impressive. Other tracks, like “Evidence,” “Teargas,” “Day,” and “A Darkness Coming” also benefit from the acoustic format. Truly it’s hard to pick favorites here.