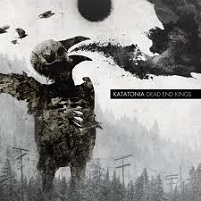 Twenty-plus years removed from their outright origin and sonically evolving with every release, Katatonia makes their very welcome return to us with their ninth album Dead End Kings. Unlike most groups consistently playing music beyond their twentieth year of existence however, Dead End Kings, while in many ways familiar, continues this evolution by minor degrees and is unquestionably the band’s strongest album in a decade [really? – ed.]. Losing most of the ephemeral window dressings that served as ‘metal’ sounds on the last few releases and still seething with an ongoing sense of bleakness, the songwriting here is particularly introspective and showcases Katatonia at their finest.

Though never rustic in appearance or sonics throughout their history, the last decade of releases has seen the band move in an increasingly urban direction with their tone. That isn’t to say urban in the form of sideways DC caps and jean shorts so prevalent in some of the deathcore bands, but rather the darker and more desolate side of urban isolation that was worn by bands like Amesoeurs. The sheen of decay that can only be experienced within the heart of urban centers, surrounded by countless others and drowned in blinding light but nevertheless existing in perpetual states of loneliness. “The Parting” and “The Racing Heart” each embody this spirit, musically and lyrically, the marriage of downer themes here more effective than ever, given any attempts at lyrical aggression have at last been left by the wayside. “Ambitions” likely, is no accidental in its naming, harkens back to an era of legitimate misery espoused by the band that for some time has existed only as faint whispers.

This indulgence in the icy dark hasn’t spelled a complete end for the ‘metal’ elements, though they have been greatly diminished. “Buildings” and the very peculiar Tool-esque stylings of “Dead Letters” serve to highlight what remains of those heavier tones and serve fantastic ends for stylistic diversity, all neatly wrapped up in the same core of super-tight songwriting. Additional and unexpected female vocals warmly support Renske on the almost-ballad that is “The One You Are Looking For Is Not Here.” The bitterness inherent in its otherwise lasting sweetness is a newfound high for the band, but it’s only one gem among an album full of them.

That juxtaposition is likely the most tangible change for the band versus the last few releases: a very palpable misery. Unknowable what has stirred so darkly within the Katatonia camp but no matter the source the bleak threads that have long been a feature in the band’s tapestry of sounds are here more pronounced than ever, heartstrings of those seeking happier times be damned. Ever a welcome presence here in the house of Blistering, Katatonia have outdone themselves in an already shimmering career with Dead End Kings, a band into its third decade of life and stronger than ever.