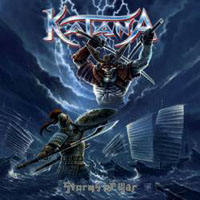 Downtime doesn’t appear to be in this Swedish traditional group’s mindset, at least in this point of their career. Striking while the iron’s hot from their 2011 Heads Will Roll debut and touring with the legendary Lizzy Borden across mainland Europe, the quintet from Gothenburg set about writing the follow up, Storms of War rather quickly. With King Diamond guitarist Andy Larocque behind the production chair, Storms of War will either make Katana another worthy Swedish contender to the Wolf/Enforcer new brigade throne or may cast them into the land of bargain bins forevermore.

The opening salvo of riff peeling from guitarists Patrik Essen and Tobias Karlsson on “Reaper” rivals the best 80’s Judas Priest with Accept for good measure- and the trade-off solos are pure ecstasy for all air guitarists worldwide. Sometimes the reference points get a tad obvious: Iron Maiden on “Wrath of the Emerald Witch,” Loudness on “The Samurai Returns,” but Anders Persson’s poised drumming and the multi-octave, high-octane melodies from Johan Bernspang more than make up for any similarities.

Bernspang even shows off a lighter, lower playful side to his voice ala Bruce Dickinson during the shorter, gallop-worthy “City on the Edge of Forever.” The swirling wind effects and a slow moving bass line signal the start of the eight-minute epic “In the Land of the Sun,” the verse melody mirroring the open clean plucking before the tempo moves upward and you feel like you are experiencing another NWOBHM journey with a series of Egyptian point-counterpoint guitar refrains. And how about the Omen up and down guitar harmonies throughout “Modesty Blaise” circa Warning Of Danger?

Since Iron Maiden feel that their fans desire more progressive rock-length arrangements over the classics they rendered on the first seven studio albums, Katana could fit that missing niche in your collection with Storms of War. Thank you gentlemen for bringing me back to my teenage years with this one. 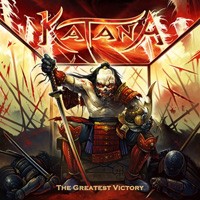