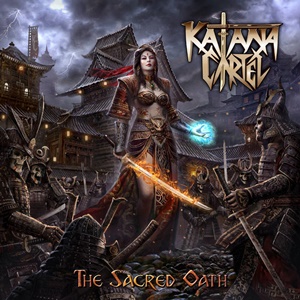 Making a return appearance from their 2016 War Part I EP with a full-length in The Sacred Oath, Australia’s Katana Cartel took their time to develop a bit more seasoning and strength under their belts. Originally developing a sound that traversed elements of Judas Priest, Accept, and NWOBHM against early Metallica, this scribe had hopes that the five-piece would dig deeper and work harder at crafting stronger hooks, riffs, and songs that took on more of their own stamp. After numerous playbacks, all signs point to a better, more original outlook and improvement for the execution and audio components to hopefully broaden their appeal.

The twin guitar interplay and natural rhythms /lead breaks from Rob Georgievski and Dylan Reeves deserve ample attention, as it’s high quality, highlight reel material they churn out of the Iron Maiden/ Metallica variety during cuts like “Night Town” and “Fragile Denial”. Natural air siren supplementation comes in for “Air Raid”, while the band lock into a bit more of a staccato/early 90’s groove song for “Dime a Dozen” that may be more favorable to Pantera/Fight fans than most traditional or power followers, although the melodic background vocal support does keep it a little more in Katana Cartel’s wheelhouse. Towards the end of the record the band break out a couple of six-minute plus arrangements for “The Art of Self-Destruction” and “Judge Shredd”, allowing some flexibility in semi-thrash and power instrumental bursts while vocalist Steven Falkingham challenges himself with a smooth mid-range and higher harmonies, proving he’s capable to take the songs to that next level through his pipes and emotional note scooping. Improvement could still be had in certain sequences, especially in the occasional basic drum approach John Price employs in the straightforward ‘groove’ sections, but overall Katana Cartel have put in the work to become stronger and more effective in execution, ideas, and performances.

The Sacred Oath illustrates a band willing to put their needle to the grindstone and develop a stronger heavy/power metal output, channeling their influences into a style more of their own. Katana Cartel like many other Australian metal outfits prove why the land down under deserves global attention because there is an abundance of talent waiting to be heard. 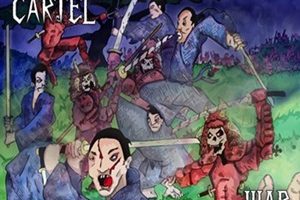