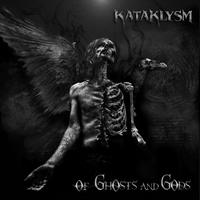 What can be said of the ever-consistent and perpetually in motion Kataklysm? Ever since the early 2000’s, they’ve decided what works best and they’ve stuck to it. Sure, there are variations here and there, but the band travels down the road that they’ve paved so well. And at this stage in their career, that’s a very good thing.

If there is one piece that stands out here, it’s the amount of melodies woven into Of Ghosts and Gods. Not that Kataklysm has gone all melodeath on us (one listen to “Vindication” will disintegrate that notion), as the usual thick and chunky groove/blast combo that the band has seemingly trademarked is ever-present, but a number of the tracks also have an underlying melodic presence, much like “Elevate” on the previous album Waiting For the End to Come. Cuts such as “Soul Destroyer” and “Breaching the Asylum” will provide ample proof of this, and other tracks like “The Serpents Tongue” and “Shattered” lay down the groovy, mid-tempo headbanging riffs you’ve come to expect. This being drummer Oli Beaudoin’s second album with the band, the drum patterns have a bit more flavor to them while retaining the definitive Kataklysm elements of the Northern Hyperblast, yet some little nuances creep their way through the speakers.

It may be more of the same from Kataklysm, but their songwriting continues to make all the difference in terms of keeping the songs at the usual standard of brutality yet allowing the listener to have a semblance of melody to grapple onto. The band has earned their place as one of death metal’s most consistent and entertaining – Of Ghosts and Gods is just one more example of why that is (and shall continue to be) the case.