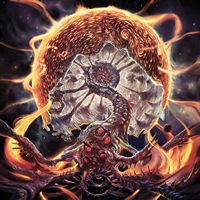 Fear not the seemingly tech death cover art (which is admittedly rather cool looking), Karybdis aren’t here to melt your brain with dizzying guitar acrobatics. The melodic death metal act have returned from their slumber (it’s been three years since their debut From the Depths) to hit hard with Samsara. But this heavy-hitting comes from songwriting above all else.

Mostly operating well within the melodic death metal framework, Samsara may not be the fastest, most technical, or (thankfully) the most melodic. What the band seems to really recognize is the art of “songs.” Just listening to opener “Rorschach” validates this, with some galloping, thrashy riffs with some real headbang potential occupying a good chunk of the track, but there’s a sleek little atmospheric melody towards the end that is equally killer. “Mermaids” brings forth an acoustic intro that slowly builds into a grand harmony and later mid-tempo groove. The blistering “Avarice” is a solid fistpumping track with enjoyable leadwork and it’s not afraid to get downright heavy at times. A real zinger of a solo awaits in “Constellation,” showcasing the band’s ability to think outside of the box. A great deal of balance permeates the record, and it’s these little nuances in each track that give them a more individualized feel, without having to resort to dare we say, cheap shots such as melodic vocals, to make the songs standout.

Some catchy and memorable melodic death metal is to be had with Samsara. While it does tread some familiar ground, the attention to details within each track make up for this. Sure to appeal to fans of the genre looking for something on the heavier end of the spectrum.