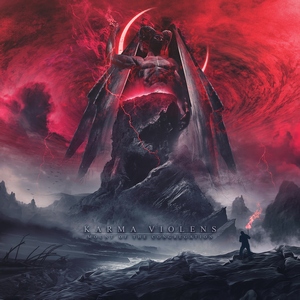 Next up in the death, black, thrash mash-up battle is that of Karma Violens. Establishing themselves back in 2002, the Greek act has released three albums previous to Mount of the Congregation and have established a bit of a foothold in the scene. With this fourth release, they provide a keen sense of melody, aggression, and epic scenery to really sell the listener on all of it.

While the elements may seem straight-forward and plain, Karma Violens really possess the ability to utilize all aspects of their sound wisely and with purpose. The death/thrash underbelly gives it plenty of energy and speed to fuel the band forward, and the blackened elements often lead to some really gripping melodies and atmosphere. It’s also one of those cases where you can tell all three parts are being used, but it’s not like you can just pick them apart like pieces of a puzzle. Instead it all comes together to give the band their sound. The use of blackened melodies on “The Observer” gives it a more epic, almost cinematic feel to it, while the thrashy riffs lend a greater urgency to it. The title track stands out later in the album due to the use of some clean female vocals in addition to the raspy repertoire, and too offer a more epic feeling to the song as it drives ahead with mid-tempo thrashing and death metal grooves. As noted, the melodies really are what push this above some other acts – it’s heavy no doubt, but the level of melodies brought in during each track provide another layer to contrast that abrasive edge against.

Karma Violens take a well-blended mix of genres and gives it the melody and variety needed to hook the listener. Able to be scathing and furious, but lace it with some accessibility without compromise, Mount of the Congregation is sure to win over some fans seeking this particular mix.