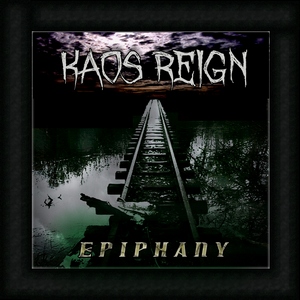 Connecticut’s Kaos Reign is what you might call a jack of all trades. Their sound isn’t really rooted in one specific region of metal, but instead happy to pilfer and redesign things that they clearly enjoy about the genre and make it their own. Which makes their third album, Epiphany, a record that you can’t help but love.

As you make your way through Epiphany, you can hear a variety of sounds – from the more extreme elements of death, thrash, and doom to more traditional heavy metal and groove. All familiar elements for sure, but they give the band a sound is more than a mere listing of influences. Most keen to the act is, as was previously, their knack for songwriting. The sheer diversity could easily become a stumbling point for many acts, or at least make things disjointed, but Kaos Reign focus on simply making strong and catchy songs. The extreme elements never outright takeover the act, but merely act as an additional level from which to draw from, as punchy grooves (“Lethal Injection”) constantly reward the listener while acting as the glue that holds everything together. There’s never a lack for memorable moments, from a galloping thrash (“Dispatch the Threat”) to a melodic yet monstrous riffs (“The Criminal Inside”), and it helps to sustain the band for near an hour, even if there is a slight dip right before the end of the album.

Epiphany is one of those albums that’s just best described as metal to the bone. A pure blend of different influences and sounds that is ripe with enthusiasm and enjoyable riffs and melodies that are sure to stick with the listener. Kaos Reign may not be huge on the map just yet, but they are well on their way to making a name for themselves.