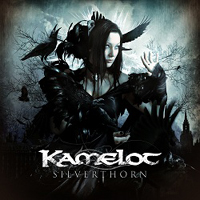 The 2011 departure of longtime singer Roy Khan was handled about as well as any high-profile singer exit could have been, a telling trait of just how tight a ship main Kamel-dude Thom Youngblood runs. After resisting the temptation of enlisting tour singer Fabio Lione (Rhapsody of Fire) full-time, the band plucked Swedish vocalist Tommy Karevik (Seventh Wonder) from relative obscurity to take Khan’s place. In keeping with all things seamless, the band hasn’t skipped much of a beat, with Silverthorn emerging as another steady effort from one of power metal’s most consistent bands.

Being that Karevik was one of Kamelot’s backing singers whilst on tour, his comfort level with the band was more than likely one of the main reasons he was given the nod. That, and his rather noticeable resemblance to Khan, something the band will probably try to deflect in interviews, but it’s obvious on more than a few occasions. It’s not a big deal, though, for it’s not like Khan was an untouchable entity to begin with, so Karevik’s soft, hardly-imposing power metal pitch fits the band like a glove, for that’s exactly what Kamelot are: hardly imposing, but as dramatic as a Broadway play.

Almost immediately, it’s readily apparent the bulk of the songs on Silverthorn have much a stronger riptide than its Poetry for the Poisoned predecessor. Sure, the band hugs the formula like a Greenpeace member hugging a redwood (i.e. heavy/symphonic intro, wimpy verse, dramatic chorus), yet it’s in the dynamic bits found in lead single “Sacrimony (Angel in Afterlife)” and “Torn” is where Kamelot’s time-honored traits seem to work the best. Minus the throwaway ballad, “Song for Jolee,” Silverthorn manages to keep its natural momentum and pomp, which is led by unsung keyboardist Oliver Palotai, who demonstrates his muscle on “My Confession” and “Prodigal Son.”

Since the transition from Khan to Karevik went off without a hitch, Kamelot hasn’t suffered in the slightest in the power metal rank and file. They’re arguably the best North America has to offer, even though the fact Karevik is from Sweden and Palotai is from Germany shuffles that a bit. Nevertheless,Silverthorn  could have been one of those disastrous transitory albums, but it’s nowhere close to that. Business as usual.