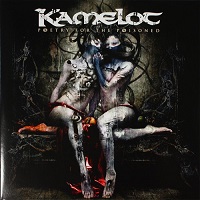 Ninth album for this veteran dark power metal act, who have reached headline status the world over thanks to the charismatic vocal presence of Roy Khan, the unyielding work ethic and vision of guitarist Thomas Youngblood and the overall impact to not stand still musically when others would be content to coast with their style.

Poetry For the Poisoned contains an array of guest appearances that come into play based on their skill sets: Bjorn ‘Speed’ Strid of Soilwork for his death roar on “The Great Pandemonium,” Jon Oliva [Savatage] and Amanda Somerville for their special vocal contrasts during “The Zodiac,” Gus G from Ozzy/Firewind lighting the fretboard on fire during “Hunter’s Season” as well as long time guest Simone Simons from Epica during the ballad “House On A Hill.”

I believe Kamelot at this point in their career prefer to explore songwriting realms with larger, grandiose theatrical arrangements, almost as if they are conveying scenes in the grand scheme of a play (especially evident in the four-part title track). Keyboardist Oliver Palotai appears to have more of a hand in the proceedings, intertwining computer-generated sounds against his normal symphonic laden chord duties. This makes for a deep headphone experience as I’m certain many Kamelot consumers will savor progressive-like tracks such as “Seal of Woven Years” or the conventional energetic fare of closer “Once Upon A Time.”

If you thought their last opus Ghost Opera was a little too modern for your tastes, Poetry For the Poisoned may appeal to your senses as I think Kamelot recognize the need to walk the tightrope between pleasing their creative juices and also writing material that will stay with the fans for a lifetime. When analyzing this against their complete discography, the album as a whole doesn’t maintain a permanent place in my heart like Siege Perilous or The Fourth Legacyand yet I respect the multi-cultural explorations sonically enough to return to this from time to time.