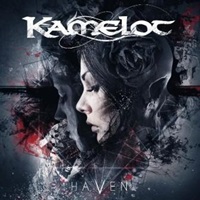 Sowing the seeds even when the deck stacks against you can usually mean a reasonable harvest when tides turn. For Florida symphonic power metal band Kamelot, their early 90’s origins meant they needed to seek overseas exposure to gain press acclaim and label attention because of a clean singing backlash – finally breaking through in their homeland in the late 90’s and early 2000’s through a series of impressive albums like The Fourth Legacy and The Black Halo. The latter Khan-led vocal years began to showcase a more modern leaning band, meeting with critical indifference as well as some audience apathy (remember the last time you went back to Poetry for the Poisoned?) – so it wasn’t that shocking that as Swedish vocalist Tommy Karevik from Seventh Wonder took over for 2012’s Silverthorn, all would be well for the classic Kamelot sound to return.

Forging new label ties, Haven delivers 13 more tracks of their dark, theatrical oriented power metal that features exotic and neo-classical/symphonic touches. Hovering around some of their modern, heavier tonality moments during the main tempo sequence and key riffs for “Beautiful Apocalypse”, the up-tempo flourishes for “Veil of Elysium” and “Liar Liar (Wasteland Monarchy)” remind long-timers that they continue to bring the right drama/tension combination to elicit a high adrenaline dose rush. Keyboardist Oliver Palotai can lead the hook charge through simpler refrains and symphonic embellishments – check out “Insomnia” and the lighter ballad “Here’s To the Fall” for his importance in setting moods through his chord voicing.

Guitarist Thomas Youngblood breaks out a lot of smoldering lead tricks, taps, and melodic restraint even beyond his normal steady rhythm foundation – as “Citizen Zero” plus the soul stirring “End of Innocence” feature exemplary, well thought out measures that proves he is in the power metal elite. And what about Tommy’s voice? Many will hear that Khan-like charm, but I believe he also has a little more fierceness plus tenderness when called for depending on the arrangement and feel for the track. “Under Grey Skies” features Delain singer Charlotte Wessels along with Nightwish’s Troy Donockley on uilleann pipes, Tommy trading off and coming together in the best Broadway sense possible for this somber ballad.

For comparisons sake, Haven takes a lot of the classic Kamelot trademarks that made Epica and Karma well revered, plus adds in a little more of that modern Ghost Opera punch to the mix. Bottom line – the band is doing just fine in the post-Khan period, and remains a leader in the genre.