Kalmah – For the Revolution (Spikefarm) 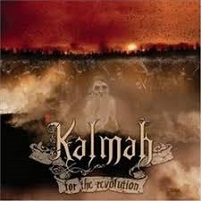 One of the true underrated gems of this decade has to be Kalmah’s 2002 effort, They Will Return, a delicious slab of hyper-Bodom melodic death metal, amplified with seismic hooks, scorching leads, and gorgeous guitar melodies that simply would not quit. For a brief time, the Finns were backed by Century Media domestically, only to have the union cease after 2003’s above-average Swampsong album. 2006’s The Black Waltz was slightly worse for wear, as the band abandoned the vast portion of those blinding melodies in favor of a more straightforward approach.

Fast-forward to 2008 and the band appears to have righted the ship with For the Revolution. Wisely returning to their forte of melodically capable, classically-inspired Finnish death metal, Kalmah have created an album that outshines the recent Bodom and Norther full-lengths by leaps and bounds.

Led by flashy lead guitarist Antti Kokko, Kalmah’s sound is rooted heavily in Kokko’s laser-sharp lead runs on opener “For the Revolution.” “Dead Man’s Shadow” and “Holy Symphony of War” dole out some vicous Bodom-esque shout-alongs during two savory, carefully crafted choruses, while the band’s thrashy side gets a workout during “Wings of Blackening.”

It is not until the back end of the album when Kalmah starts putting the listener through the melodic wringer. The sullen “Ready For Salvation” serves as impressive change-of-pace number for the band, with a graceful atmosphere carrying this track to levels not yet seen in the Kalmah pantheon. Then, more domineering, memorable melodies take form in the soaring “Towards the Sky” and perfectly executed closer, “Like A Slave.”

An album that has yet to wear out its welcome, For the Revolution has emerged as a rare find for 2008 in the sense that with every listen, a new nugget of ear candy is mined. With Spinefarm reportedly gearing up to open a North American office at some point this year, For the Revolution should receive a stateside release during the calendar year, of which, anyone who fancies melodic death metal in its truest, yet most breathtaking form would be advised to pick this up. Highly, highly recommended stuff.