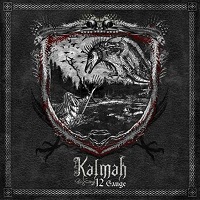 After 2008’s dominating, world-beating, universe-owning For the Revolution, Kalmah appears poised to further ascend up the melodic death metal ladder with 12 Gauge. We’ve stated this a handful of times (click here for proof), but it bears repeating: few bands

in the melo-death realm are as creative, vital, and all-around consistent as Kalmah. 12 Gauge backs up that statement, thank you very much.

Forging onward with visceral melodies and extreme metal leanings that were found on For the Revolution, 12 Gauge is propelled (once again) by the leadguitar

antics of Antti Kokko. Kokko often puts himself in a position to succeed, especially after daring trade-offs with keyboardist Marco Sneck, thus resulting in memorable lead portions during “Rust Never Sleeps” and album highlight “Hook the Monster.” Alexi Laiho may grab most of the headlines, but there is no more fluid and methodical lead guitarist than Kakko in Finnish death metal.

There’s no shortage of break-neck riff-action here, especially the opening sequence during “Bullets Are Blind,” the “Hangar 18”-oriented “Swampwar” and graceful “Better Not To Tell.” Melodies pop in and out of this thing, serving as the vocal point, although Kalmah has never been ones to run melody into the ground, just reference the angular, yet angry title track and hyper “Godeye.”

Presently, 12 Gauge doesn’t match the all-around glory of For the Revolution, yet the traditional nosedive most bands perform after their best album is nowhere to be found. They’ve continually built upon the foundation laid with 2002’s excellent They Will Return and in a rare move, have gotten better as the years have progressed. Try relating that to In Flames, Bodom, Dark Tranquillity, etc. With some rumblings of North American dates for this year, there may be no better time for Kalmah to strike than now.