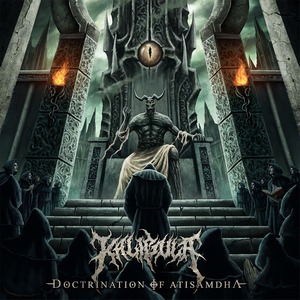 For the most part, when one first things about death metal bands hailing from Indonesia (or eastern locales in general), the thought immediately goes into slamming or uber brutal death metal. There’s a ton of it in that vicinity, and some of the better acts in the style do originate in that area. But Kaligula is different in that they are more of a straight-up death metal entity. No bells or whistles, nor hyper-extremity, just a gut-punch of death metal.

Kaligula frequently employs top speed as a vehicle to deliver their brand of death metal, which does tend to have some Nile-esque influences in sound. But don’t equate that to a copycat sound, and nor does the often speedy emphasis diminish the band’s ability to keep you engrossed in the moment. The fast-paced segments are often laced with some enjoyable melodies to tickle your fancy and they are quite effective at getting your attention. “Idealis Para Permangsa” is almost unrelenting in its runtime, but the sheer number of playful melodies that you bear witness to is impressive. Some occasional atmosphere (“Ati Samdha”) also breaks up the frantic pacing, as well as a few well-timed slowdowns into less blasty territory (“Catastrophe”). But as it should be, the number one priority is to bring forth aggression and Doctrination of Atisamdha is boiling with rage.

Eight years removed from their first offering, Kaligula’s return should give death metal fans something furious to enjoy. This release is a bonafide fireball of a release, and the little melodies that flourish throughout act as a great reason to return to it frequently. Particularly for fans of Nile or Ade.