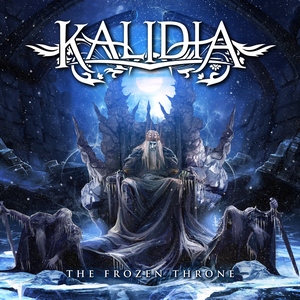 With a debut release that hit the streets back in 2014 (Lies’ Device), Kalidia return with a label backing them in 2018 with The Frozen Throne. Taking their particular brand of classic and modern power metal (with some gothic influences) to the next level for this occasion, fans of the genre who are not familiar with the band to date should put them up on the ‘need to know’ list.

While Kalidia aren’t exactly reinventing the wheel with this sophomore effort, the biggest reason to dive in is just how much damn fun it is. The songs hit an upbeat tone quite often, in a way that makes you want to raise your fists and shout along with them (while headbanging and doing some air guitar of course). The sheer feeling of triumph that the album brings is it’s silver bullet. Even on the first track, “Frozen Throne,” they manage to get you right into it all within the first minute or so, between the rousing melodic riffs, catchy synths, and soaring chorus. Each successive track follows suit, with enough individualization to ensure memorability but at the same time keep the uptempo fun rolling. Whether it’s the exotic “Circe’s Spell,” full-speed head power metal glory of “Amethyst,” or the more somber but still emboldened “Midnight’s Chant,” you are bound to get some mileage out of these tracks. Vocalist Nicoletta Rosellini (also of Walk in Darkness) has a powerful delivery that puts her out in front of the band at times but keeps an energy and flair to her voice that a number of vocalists fall flat with. But as noted above, the band more than holds their own, providing a punchy mix of material that carries just enough bombast without overdoing it into cheesiness.

Those in seek of a fresh power metal act that knows how to execute the usual moves with plenty of pizzazz and fun should quickly identify with Kalidia. The Frozen Throne packs a wallop of entertainment while impressing with musical chops – a combo that should quickly move them in front of a larger audience.

Kalidia – Contenders to the Throne