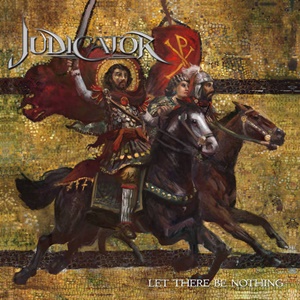 Moving up the ranks from self-sustained releases to Prosthetic Records, Judicator firmly established a solid relationship with a burgeoning fanbase who love their power metal records. Spread out all across the country (members live in Utah, Arizona, and Pennsylvania), Let There Be Nothing is the group’s fifth studio offering in nine years – a testament to steady productivity and an influx of ideas these musicians need to execute. Another concept record playing out over eight ‘acts’/songs following Byzantine general Belisarius in his quest to reconquer former Roman territories while also taming the human heart, the dramatic story plays out in equally engaging fashion through the twists and turns of the riffs, tempos, circular melodies, and numerous harmony/counterpoint measures.

The main tandem of guitarist / songwriter Tony Cordisco and vocalist/lyricist John Yelland (filled out by lead guitarist/bass play from Michael Sanchez and drummer Jordan Elcess) drive home captivating aural landscapes that can be attacking and catchy, galloping at will during “Tomorrow’s Sun” a la classic early 90’s Iced Earth as the vocals volley back and forth in a choir-like battle of their own. Epic, off to war-like music gives chase to calmer acoustic guitar and bass-filled verses for the opening sequence of “Strange to the World”, similar to what we’ve come to know and love from artists like Blind Guardian or classic Iron Maiden, John carefully placing emphasis on specific melodies and rising to the occasion for added heightened awareness, the man’s range magnificent a la Hansi of Blind Guardian. At other times twin guitar segments and thunderous drum compliments the proceedings in a semi-thrash meets almost melodic death fashion – “Autumn of Souls” a midway power outing that distinguishes Judicator from the pack, the lead break frantic with divebomb/whammy bar tricks beyond the shred. Guest musicians like vocalist Mercedes Victoria on “Gloria” as well as guitarist Christian Münzner providing a lead for the nine-minute epic “Amber Dusk” add the right seasoning and skill sets to make what was already great for a foundation even that much better.

If there’s one minor quibble to the specific tones of Let There Be Nothing, it would have to lie in the flatter snare sound Michael received for this effort – this scribe would have preferred something a bit snappier or heavier to match the guitar/bass proceedings. It doesn’t dramatically lessen the overall sound of these songs – as Judicator continues to prove that American power metal has just as much muscle, might, and weight to appreciate as their European brethren. 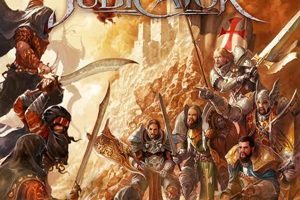