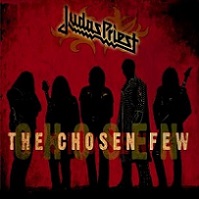 To the casual listener, Judas Priest has roughly three songs

: “You’ve Got Another Thing Coming,” “Living After Midnight,” and “Breaking the Law.” Then there’s the second-tier “hits,” then the rest is either solid gold (steel) or arguable filler. Compilations like The Chosen Few choose to operate around the latter two notions, this time with the cute little twist of having several big names from the hard rock and metal world choose their favorite Priest songs for inclusion. Suffice it to say, no one on this list was going to vouch for “Hell Patrol.” Very doubtful David Coverdale or Alice Cooper has ever heard Painkiller’smost rocking song

Frankly, just about every song on this compilation has been waxed on to death, and if you’re unaware of the mastery that is “Rapid Fire,” or “The Sentinel,” or “Painkiller,” then one has to wonder what rock you’re living under. To The Chosen Few’s credit, a few minor, unheralded songs are given a go, specifically the spectacular ballad “Beyond the Realms of Death,” a sad tale about a man living in an insane asylum (as chosen by Lars Ulrich, no less), and “The Ripper,” which was selected by Ozzy Osbourne, who probably has zero recollection of anything Priest has done after 1980. A good choice nonetheless.

Sin After Sin’s “Dissident Aggressor” gets the nod from Steve Vai and Queensryche’s Geoff Tate, although one could make the argument this song is better known for Slayer’s cover version on South of Heaven. Funny

that Korn’s Jonathan Davis selected “Turbo Lover,” a song that is as metal as Davis’s signature Adidas pants, but it’s silly enough to be enjoyable.

Beyond that, it’s all of Priest’s main live staples, thus making this compilation come up short for those who have already cobbled together the band’s exhaustive catalog. If Priest really wanted to test the limits of their discography, a compilation of their lesser-known songs would do the trick. There are tons of odds and sods in the Priest pantheon that no one outside of the band’s core fanbase seems to care about, which could go a long way toward making up some ground to Iron Maiden, who have effectively prolonged their career by doing just that: Maximizing their deep back catalog. Priest would be wise to do the same.