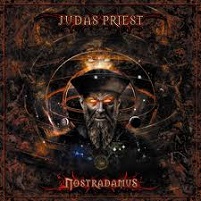 Three years removed from Angel of Retribution, Priest have once again set themselves up for a precipitous fall in the form of a Turbo and Ram It Down with Nostradamus.

At this stage in their career, the band might have been better off with a simple studio release, perhaps expanding upon the good ideas unearthed with Angel, that being “Hellrider,” “Judas Rising” and “Worth Fighting For.” Instead, Halford, Tipton, Downing and co. are in over their heads, creating an album that is not only boring, but is evident of a band finally showing signs of major wear-and-tear.

In order to gauge where Priest went wrong, it is important to examine other concept albums from bands that elevated their careers: Blind Guardian, Queensryche, and heck, Dream Theater

. All three were able to draw from various points of their catalog, engaging the listener with a quality storyline and music with many peaks and valleys. The drama contained in all three albums (Nightfall in Middle Earth, Operation: Mindcrime, and Metropolis Pt II: Scenes From A Memory) was made all the more palpable thanks to the versatility and sense of urgency contained within. On Nostradamus, it’s the complete and total opposite.

The slow-mo, unenthusiastic vibe of “Revelations” and “Conquest” are only hurt more by the sagging “War” and syrupy “Hope” and “Exiled.” There is little in terms of jagged, razor-sharp riffing the band was known for, and frankly, thesesongs

simply don’t call for anything remotely “cool” in the sense of classic metal riffing and structure. And somewhere along the way, the band must have mistaken drummer Scott Travis for ex Priest drummer Dave Holland – the man is given nothing to work with. Nothing.

There are some good moments: Tipton’s solo in “Prophecy,” the sweet melodies in “Lost Love,” the build-up to “Nostradamus” via “Calm Before the Storm” and mostly Halford’s performance throughout – the man’s voice still has the ability to send shivers down one’s spine. The intro’s (inserted to add weight to the storyline) are fine as well, it’s just unreal how lethargic this album sounds.

In the end, the band made two mistakes: burying Scott Travis and not hiring an outside producer. A Roy Z or Chris Tsangarides would surely have added some form of quality control to this, a veritable “No guys, this simply does not work,” but ‘twas not to be – Priest really missed the mark on Nostradamus.

When (and if) there is another studio album, you would have to think Priest will market it as a return to form, their Painkiller Mach II, if you will. For now, these songs will stick out like a sore thumb this summer on the Metal Masters tour and don’t expect Broadway to come calling with the proposed Rock Opera version of Nostradamus.