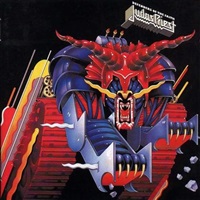 One of the first five metal album purchases in my life, Defenders of the Faith would be my second full-length exposure to these legendary ‘British Steel’ artists – as a neighborhood friend let me borrow his Screaming for Vengeance tape a year prior. Given the fact that a lot of these records are hitting the 30 year (and beyond) mark, it’s little surprise that record labels re-issue product and tack on bonus material in the hopes of more sales. What this means in this particular case is a triple disc package – two of which contain a Long Beach Arena live recording from the Defenders tour on May 5, 1984… all 21 songs balancing out the old with the new in Judas Priest’s legendary discography.

The original album contains a number of masterful moments that propelled the future power metal acts that rule today like Cage to Primal Fear. “Freewheel Burning” contained one of the speediest tempos to date for the band, Rob hitting all parts of his register especially during the pre-chorus and the tongue twisting bridge. “The Sentinel” is another favorite, K.K. Downing and Glenn Tipton giving all guitar hero mavens a clinic on exemplary tradeoffs and harmonization. Side two contains the darker “Love Bites” and obvious commercial nod for “Some Heads Are Gonna Roll”, and I think in the history of the band many would safely consider Defenders of the Faith the last great Judas Priest record in that decade.

Let’s take a look then at the live concert that comprise discs two and three. Remembering the fact that the Metallion cover art had taken shape on stage, it’s not surprising that “Love Bites” and “Jawbreaker” would open the concert. Immediately noticeable though is a lower snare tone, the hits from Dave Holland more in line with a pop band than one of the biggest heavy metal bands of that era. The set list is heavily weighed to the British Steel, Screaming for Vengeance, and DotF efforts (almost 80% to be exact) – but we do get early classics like “Sinner”, “Victim of Changes”, and of course the motorcycle rev up “Hell Bent for Leather”.

You can’t go wrong when throwing fists in the air to “Electric Eye”, “Metal Gods”, or the anthem of their catalog “You’ve Got Another Thing Comin’” – especially when Rob Halford is leading the arena crowd through a cappella sing a longs. Prime time headlining days for Judas Priest certainly – so the nostalgia pays dividends as the band were indeed larger than life. What will be next though to get the deluxe treatment? Hopefully Painkiller and not those turbo-nauseous transitions…