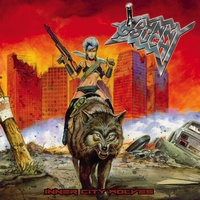 Back in my youth, we often depended upon the word of journalists in print, disc jockeys on the radio (if fortunate to have a cool station in your area), or raiding friends collections to gain insight into the glorious heavy metal world. Short of that, cool album covers and song titles would do. So one look at Australia’s Johnny Touch debut album Inner City Wolves on first impression art alone with a killer Judas Priest-ish logo and a warrior/Mad Max woman atop a killer wolf should alert you to a traditional/power outfit that lives and loves the 1980’s.

Be it the mixture of Jamie Whyte’s Randy Rhoads meets Iron Maiden riff gallop on “The Metal Embrace” or the equally impressive soaring range from Pahl Hodgson that rivals Dickinson, Halford, and Rivera at their best, the 8 tracks prove that Johnny Touch as a quintet reach back to the roots of an explosive early scene and muster material that legions of denim jacket clad fans favor. Occasionally moving in a complex, building direction during the extended instrumental section of the 7:32 “Lady Strutter” that mutates Rainbow class with Diamond Head/Cloven Hoof-like pacing and emotive lead breaks/harmonies, the band can also just gets heads down and heavy in a compact manner, as “Dishonourable Discharge” and “Bitch of a Son” (love the word juggling, possibly paying tribute to Accept?) illustrate their quick hitting charm.

Considering the attention a lot of the extreme/power/progressive bands are gaining in Aussie-land, Johnny Touch’s arrival couldn’t be at a better time. I know those who dig deep into the annals of metal history and remember the long lost artists such as Cities or the severely underrated Riot will find a lot of similar qualities in Johnny Touch: melodies abound, a variety of tempos that can be introspective to heavy, and guitar parts that promote power and speed from a traditional platform.

Brandish your sword, die by the blade, Inner City Wolves in less than 40 minutes gives breath to a sub-genre that will never perish.