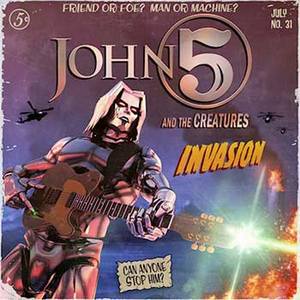 John 5 is one of the most versatile guitar players out there, as evidenced by the roster of musicians he’s worked with and played with, including David Lee Roth, Rob Halford, k.d. lang, Marilyn Manson, and Rob Zombie, to name a few. He is probably most closely associated with the latter two names, having gained his John 5 stage name when joining Marilyn Manson and having been the guitar player in Zombie’s solo band since 2005.

Zombie, who has as prolific a career as a film director as he does as a musician, is constantly balancing the two, often putting one on the backburner while he focuses on the other. For those who clamor to hear more of John 5’s skills with six or seven strings when Zombie is holed up in a film studio or behind the camera, thankfully John 5 continues to write, record and release solo records.

Invasion is John 5’s ninth solo album and the third one under the moniker of John 5 and The Creatures. The Creatures refers to bassist Ian Ross and drummer Logan Miles Nix, both of whom play an integral role on Invasion, as the songs here would just not sound the same if it were simply just John 5 and his Fender Telecaster. While John 5’s guitar acrobatics are on full display across the album’s 10 songs, Ross and Nix not only provide a solid, rhythmic foundation to the proceedings, but also add their own touches and flavors to the songs, making them that much more well-rounded and developed pieces of music.

As often as John 5 delves into his bag of tricks on Invasion, be it tapping, shredding, harmonics, or chicken pickin’, most of which can be found among the smorgasbord of sounds that make up “Midnight Mass,” he also doles out plenty of treats, such as breaking out the voice box for “I Want It All” or the slide guitar for “Cactus Flower,” and mixes things up nicely to keep the listener on their toes, never knowing quite what to expect.

Sure, there are the obvious industrial-sounding, signature tunes you would expect to hear on a Zombie or Manson album, such as “I Am John 5,” with its metallic, robotic voiceovers and its techno remix soundscape (think the Mortal Kombat theme remix) and John 5’s determination to squeeze in as many notes as possible during the verses, as his fingers fly all over the fretboard, but then you also have the playfulness and fun nature of “Zoinks!”

Released as the album’s first single, and backed by an entertaining, “Scooby-Doo!” style animated video, “Zoinks!” begins with very springy-sounding guitar chords, as Nix provides a steady beat and Ross lays down a subdued, yet rumbling bass line, before giving way to some sweep action that recalls moments of the tap-fest that is Joe Satriani’s “Midnight.” There’s plenty of sweeping, tapping and shredding throughout the rest of the song before returning to those springy chords to close it out. Like, the only thing missing here, Scoob, is a Casey Kasem voiceover.

One of the true gems on the album comes halfway through in the form of “Howdy.” A fast-paced, up-tempo piece, the song sounds like it could be the theme to an old western TV show, as John 5 wastes no time getting to what he calls chicken pickin’ (think banjo and bluegrass). Nix’s percussion work makes it sound as if you’re chugging along on a locomotive and the intermittent, high-pitched shrieks of “How-dee!” add perfectly to the Roy Rogers/Buck Owens scene that is painted.

Rounded out by a crisp production, courtesy of Barry Pointer, and the colorful “Mars Attacks,” comic-book-like album artwork of Disney animator Brett Boggs depicting John 5 as a robot shooting a laser from the neck of his guitar, Invasion is the total package. A cavalcade of guitar effects, sounds and styles that illustrates the depth of creativity and skill John 5 and The Creatures possess that will soon have you hitting the replay button to discover even more of the tricks and treats found within.