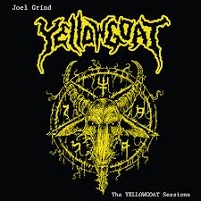 The year that is 2013 has seen Joel Grind do a bit of closet cleaning, hasn’t it? First, Toxic Holocaust’s From the Ashes of Nuclear Destruction compilation hit the streets, and now Grind’s The Yellowgoat Sessions is getting a proper release barely a year after its recording. Not sure why these songs weren’t pegged as Toxic Holocaust jams, The Yellowgoat Sessions is an entirely redundant release from Grind, who either wanted to give his arcane thrash tracks a fresh title…or didn’t want to use them in the context of Toxic Holocaust.

Almost all of these tracks are characteristic of what he already does in his main band. Like, is anyone going to know the difference between the retrograde thrash of “Hail to Cruelty” or “Grave Encounters” versus anything Toxic Holocaust has released of late? Probably not. Denim-sporting numbers like “Hell’s Master of Hell” and “Black Order” are cool for a cursory listen, but fail to match the original spirit of mid-80’s thrash. As in, the originators had a little more fire in their bellies than Grind, regardless of how true to the cause he is. And yeah, he’s true to the cause alright.

Grind has developed his own little cult following over the years, so The Yellowgoat Sessions will probably find a landing spot with that crowd…wherever or whomever they are. If anything, it was probably a fun thing for Grind to do, but not fun for anyone to exactly listen to. But hey, when you’ve paid your dues like Mr. Grind, why the heck not?