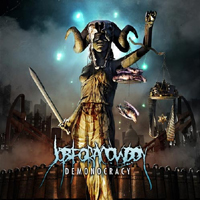 When Job For A Cowboy broke a few years ago, some of the primary complaints hurled at the band related to the obtuse and convoluted nature of their songs. While there was no questioning the band’s technical pedigree and brutality, the fact that many a JFAC tune whizzed by without any impact led many to believe their run atop the modern death metal scene would be short-lived. Five years removed from their divisive Genesis debut, the maturation process is in full-swing and the results are undeniable: Demonocracy is easily the band’s best album to date.

A revamped lineup (new members include lead guitarist Tony Sannicandro and ex-Cephalic Carnage bassist Nick Schendzielos) might have something to do with the fresh tonality of the album. Whereas blunt-force riffs were once the driving cosmetic force, there’s a more elaborate and Scandinavian bent to the band’s riff selections, as heard on opener “Children of Deceit” and the excellent “Nourishment Through Bloodshed.” Sanninandro’s influence is noticeable, as his fluent and technically-proficient leads are tossed all over the place, blending effortlessly into the scenery.

The band’s extreme metal foundation is still held together by drummer Jon “My facial hair finally makes me look over the age of 16” Rice, whose work on jams like “Black Discharge” and “The Deity Misconception” is a prime indication of his superlative drum skills. And special nods go to singer Jonny Davy, who has assembled a well-crafted lyrical palette, once again combining tales of political deceit and all-around world weariness.

Job For A Cowboy might have the unfortunate consequence of having an even more unfortunate-sounding name and being the poster children for the Myspace boon, yet such stigmas become afterthoughts when taking into account how digestible Demonocracy is. They’re not quite yet the one-size-fits-all death metal band they have the potential to be, but according to my own mother, JFAC are “such nice boys. You’d never know they play the crazy music they do by hanging around them.” False posturing has never been one of JFAC’s long-suits…and it’s really hard to argue with my mom on this one. Nice-guy death metal is hip.