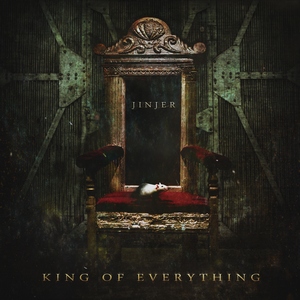 Is it thrash? Is it death metal? Is it metalcore? Is it progressive? These are some of the initial questions that you might ask when King of Everything kicks into motion, but by the time the album is over the only question that is going to matter is why you haven’t heard of this band before. Jinjer positively explode with their first album for Napalm Records, and are sure to impress with their ability to shift their music into various directions.

As the opening provided, Jinjer is not a band that is easily classifiable. Nor are they the most predictable of sorts. But it all blends together for an experience that will keep you guessing and wondering where they will go next. One of the biggest aspects present though is groove. Thick, heavy grooves give the band a modern edge (and a crisp, rumbling bass) to their sound and gives them plenty of weight to throw around. Those curious to see just how crazed the band can sound should check out “Sit Stay Roll Over,” which blows through the gates with blastbeats, screams, and wonderfully technical riffs and settling into more thrashy territory. But things switch up at the chorus, offering somewhat jazzy clean vocals and allowing the bass to roll out some grooves. “Captain Clock” works similarly, going from frenzied riffs/screams to more melodic arenas that carefully avoid the usual. “Just Another” showcases some of the band’s most progressive melodies while “I Speak Astronomy” moves more slowly, with moments of pure melody and atmosphere that work well against the crunchy, mid-tempo riffs that creep in during the song’s second half. Just as you think you might have the band figured out with the blazing thrash of “Dip a Sail,” “Pisces” sees the closest thing that you’ll find towards ‘ballad territory’ with Tatiana Shmailyuk delivering some tender vocals for a good portion of the track (yeah, there’s still some monstrous screams in there too). But closing things out is the funky and infectious “Beggars’ Dance,” nicely bringing things full circle to the beginning of the album in an unexpected and fun way.

An album that really needs to be heard to be described adequately, King of Everything provides the necessary muscle, grace, and musicianship to be appreciated by a wide metal audience. Though some moments may polarize some, the unexpected ways that they combine full-out brutality, groove, and melody make it an album worth investigating further. While it may come out of the gates as more of a sleeper, expect Jinjer to hit the ground running quickly once word gets out.