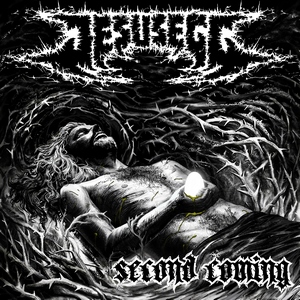 Going strong since 2003, Jesusegg specializes in grind. That special kind of grind where you can listen to, in this case, 15 songs in a span of 11-minutes. The spastic and somewhat nutty combination of explosive speed and tangled riffs that only the extreme of the extreme can really tolerate and find the nugget in the middle. Second Coming is what you’d expect for this material, but that doesn’t make it any weaker.

The fact that only three songs breach the 1-minute mark usually gives you a good indicator of what to expect. Some of those off-kilter riffing patterns that bands like Human Remains and Discordance Axis are certainly present, and it does make the songs pop a bit when used (such as opener “Julius Seizure” and later in “Profundicate”). It’s a nice shift from the full-speed blast-a-thon that grindcore can become, and some deathly injections give it some added potency in the bottom-end, like “Improper Use of a Breast Pump.” There’s a bit of Anal Cunt-esque black humor as well, if it hasn’t been picked up on by the song titles alone, “Mambo #4” is sure to seal the deal there. Primal aggression usually keeps everything moving along, as the 30-ish seconds of most tracks rely solely on adrenaline (“Autocannibalism”), and the band does a good job of keeping it all rather frenetic in tone.

The usual ‘noise’ remarks will tend to be thrown at something like Second Coming, but for fans of this style, it’s well-built from beginning to end. The time-span is perfect to avoid exhaustion, the sense of humor is dark and wicked, and the energy settles into the fun and enjoyable as each track hits you with all it’s worth.