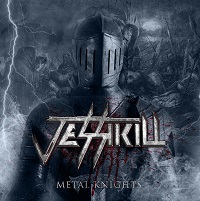 With the Metal Knights EP being the first recorded output of any kind from San Antonio’s Jessikill, the band may be relatively new on the album release scene, but this quintet is comprised of seasoned musicians that are more than competent at their craft, having slugged it out in the clubs and venues of San Antonio, Texas for the past four years and winning awards and accolades along the way.

What we have here is a power metal band with a decidedly European flavor, combining the guitar antics of Helloween and Gamma Ray, the sword and sorcery subject matter of Blind Guardian and HammerFall, and the bombast of Dream Evil. Being mentioned in the same breath as pioneers and legends of the genre is great, but if the original compositions lack energy or creativity, then no one is going to pay much attention. Thankfully, this is not the case with Jessikill. On Metal Knights, the band proves it knows how to write powerful yet memorable songs, the likes of which will be championed by legions of the heavy metal faithful.

The six-song EP opens with “March of the Knight,” an instrumental prelude that effectively sets the scene for the epic battle that will be waged across the next five songs. Blasting out of the gates with the thrash-y “Midnight Rush,” the rapid speed metal-like riff features plenty of alternate picking in the intro and during the verses from six-string tandem Joey V and Jyro Alejo (handling lead duties as well as keys), while the gritty, power-packed vocals of Jessica Marie Espinoza push the song forward. For the most part, Espinoza utilizes a strong, lower alto register (think ex-Battle Beast vocalist Nitte Vänskä meets Jutta Weinhold, minus the German accent), but she also possesses the ability to ascend to air raid siren levels (“The Beast”).

Not only does bassist Arturo Alvarado lay down a thundering low end, but his melodic backing vocals provide a fitting backdrop to Espinoza’s roar. Check out his lead in “The Beast” and the call and response tradeoffs in the chorus of closer “Don’t Let Go,” a melodic mid-paced rocker that begins with pummeling double bass from Alan Cisneros behind the kit. Joey V’s hammering rhythm playing provides the perfect foil to Alejo’s shred chops, showcased through intricate solo work that would make Herman Li proud. See his fiery fretboard runs in “The Beast” for evidence.

There’s a lot to like on Metal Knights, but if I had one criticism it would be the, at times, thin drum sound in the mix. This is not a knock on Cisnero’s skills behind the kit, as his fills, cymbal crashes and double bass flourishes will attest. The guitar and bass are up front and prominent, and Espinoza’s vocals are strong and clear; it just feels like the drum sound could have benefited from more of a punch. However, the musicianship, song-writing acumen, and addictive energy from all involved more than make up for it.

Having taken home top honors in local competitions and headlined New Year’s Eve at the Arneson River Theatre in San Antonio the last four years, it’s safe to say Jessikill has mastered the local scene. So what does the future hold for the young band? If Metal Knights is any indication, Jessikill possesses all the necessary tools to take its show on the road and would find itself right at home battling it out on stages across the European summer festival circuit. Warriors and metal knights, grab your sword and shield and join Jessikill on its quest to heavy metal glory!