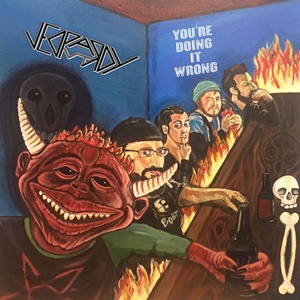 Coming on my aural landscape due to guitarist John ‘Boozer’ Short and his work at Promotorhead Enterainment for Vermont shows, it’s exciting to hear a crossover thrash quartet embody a sense of fun and party atmosphere amidst the drive and angst of the music. You’re Doing It Wrong is a full-length that serves up 17 tracks of no holds barred riffs, tempos that shift from old school punk/hardcore to uppity thrash in a nanosecond, plus a fierce vocal presentation that conjures up Sam Kinison in female reincarnation.

Channeling the right attitude and conveying the lyrical themes accurately is half the battle for conviction in any metal band – for Jeopardy, Bam has that vocal chameleon ability to be psychotic for “Bitchcraft”, hardcore and probably as whiny as certain specific customer requests may be in “Coffee Drama”, and the humorous style anthem “We’re Not a Sk8 Band”. Only two of the cuts reach beyond three minutes – conversely, ten of them range from the 14 second “Trigger Warning” opener to a tidy two-minute “Boof It!”, so you won’t feel subjugated to monotone, overdrawn fatigue as the ideas fly by. The four-piece embrace an obvious 80’s crossover template started by bands like S.O.D., D.R.I., and Nuclear Assault, but put things into current terms as far as social discussions with the internet, beer-fueled escapades and personal observations about life experience to move people – as the music creates the whirlwind atmosphere necessary for spontaneous pits, stage diving, and bonfire insanity depending on your locale. They ‘never promise to write you a love song’ for “Diablo”, and the surf-style opening guitar lick with simple drum accompaniment that opens “Connor Family Moments” will make many smile and bounce around – before turning into a rather crunchy, heads down thrash affair.

You’re Doing It Wrong isn’t trying to rewrite the crossover playbook – they merely stay true to their ideals, often producing material the general populace wants to say but seems fearful of people taking the wrong way. That’s okay – Jeopardy can be your go to musical stand in, and you’ll sweat out your frustrations for additional value.