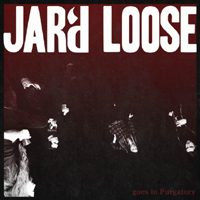 Going down like a jagged little pill (Alanis Morisette references rule), Jar’d Looses’s Goes to Purgatory is as rough and tumble as they come. Positioning themselves as a modern-day Jesus Lizard without the weirdness, this Chicago-based quartet are equally imposing and rabid on their debut. Essentially, this is beefy, powerful punk metal that has enough crassness to snag a few freeloaders from the metal crowd.

Fronted by the enigmatic and severely pissed-off Eddie Gobbo, Jar’d Loose let Gobbo does his thing across the album’s span. And by “his thing,” we mean letting Gobbo shoot verbal scythes from the gaping orifice that is his throat. Like the ill-begotten son of Tomas Lindberg, Gobbo’s vocals have such copious amounts of vitriol to them, that it practically overshadows some of the mean and lean music the rest of the band is laying down. This couldn’t be more evident on album opener “Last Living Roach,” where Jar’d Loose come in with all guns blazing, laying down a brand of mean machine rock that leaves tendons feeling ripped up, torn, and mean.

No overdubs or studio trickery to be found here, as the four-on-the-floor sounds of “Appendage,” “Right Eye,” and “Coming Like A Nightmare” brim with angst and Pete Bialecki’s angular guitar playing. Album highlight “Rotten Tooth” is front loaded with chaotic grooves and more Gobbo one-liners, creating the image of Jar’d Loose emerging from a romper room street brawl…which they have won, of course.

Goes to Purgatory may not have the metallic girth that some find to be a pre-requisite for uber-angry music, yet Jar’d Loose’s bare-bones and earnest approach is hard to mess with. This one just doesn’t quit.