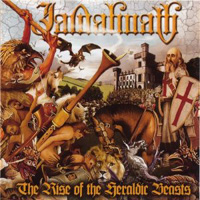 Weird, but isn’t one Alestorm enough for the world? It’s no sweat off anyone’s back to have Swashbuckle around, who are far more mean and thrashy than Alestorm could ever be, so perhaps it’s only fair that an even more jovial, slapstick concoction in the form of Jaldaboath comes around the ‘bend to nip at Alestorm’s sea-faring heels. Granted, this is far more comedic and low-level than any of the aforementioned bands could ever dream of being. The band’s debut, Rise of the Heraldic Beasts is how metal would sound if it were written for Saturday morning cartoons.

Like how the drum machine cannot be concealed (the cymbals are always a dead giveaway), the band’s total lack of self-awareness cannot be either. In this case, it’s a good thing, as it’s clear Jaldaboath has been longtime devotees of Monty Python, with visions of various gags and laughs resulting from these otherwise mindless tunes. Those who find the recent works of Korpiklaani and Finntroll (when they feel like being goofy) will probably find this more in line than anything.

The interesting and unexpected thing with Rise of the Heraldic Beasts is that these songs are so dumb, they will stick in one’s head, possibly craw, depending on the tolerance level. The title track in particular, leaves an impression, as does “Bash the Bishop” (why does this song make this scribe think of Dexy’s Midnight Runners?) and perhaps the most straightforward of the 10 songs, “Axe-Wielding Nuns.”

Clearly, there’s a market for dumb, juvenile music like Rise of the Heraldic Beasts, and while there’s zero depth or value to this, it’s fun. That’s there all is to it – Jaldaboath can’t be taken seriously, and these fun, sloppy, stupid songs are so quirky, they’ll make you come back for more. Kinda like when you were plopped on the couch on a Saturday morning, watching mindless cartoons…