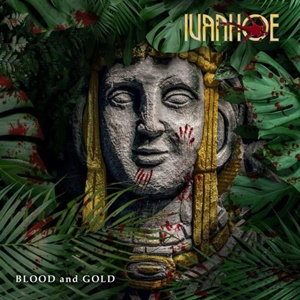 Throwing listeners a curve ball, German progressive metal act Ivanhoe for their eighth studio album Blood and Gold decide to keep things very short and sweet in terms of their songwriting and performances. When other bands would be delivering six-minute plus songs, the quintet felt the need to keep these nine tracks in a tidy thirty-eight minute and change window – allowing the melodic hooks to shine and the guitars to be a vibrant part of the catchy aspects to these arrangements. The focus pays off for long-term retention, which could gain the band a wider array of fans outside the normal progressive metal scope.

The synchronized guitar/keyboard passages within a song like “Broken Mirror” excites and delights, as Lars Vögtle and Richard Seibel know how to place themselves in the proper context to build out the hooks and anticipation for the next riff. Alexander Koch as a singer has the prime time pipes, personality, and command to travel all over the spectrum – he can be very forceful and semi-gritty on the mysterious title track, or theatrical and dramatic during the verses and chorus of “Shadow Play” – the latter featuring an exquisite sax solo from Andreas Much. As veteran acts mature, the challenge becomes pushing boundaries further as well as hopefully taking the listeners along for the ride – in the case of this record, the heavier guitars open up possibilities for groovy rhythm section interplay and smoother vocal melodies. And choosing to cover “If I Never Sing Another Song” pushes Ivanhoe into new horizons, giving this song an atmospheric texture between the circular, echo-oriented guitars, and bombastic context for the chorus.

Considering what the genre offers, Ivanhoe felt the time is right to explore those simpler aspects in terms of shorter songs while still injecting plenty of musically challenging material to absorb. Blood and Gold could set a different standard for progressive metal and allow the band to embrace an open mindedness that can continue forward creatively.