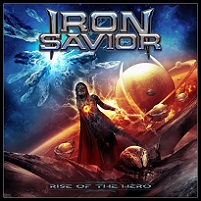 Primarily known for being one of the top behind-the-scenes dudes in German metal, Piet Sielck has enjoyed a fruitful career first, as producer/engineer of Blind Guardian, Gamma Ray, and Saxon, then with Iron Savior, the band he formed in the mid-90’s with Kai Hansen and now ex-BG drummer Tomas Stauch. Such connections are generally meaningless in the grand scheme of things, but Sielck’s roots run deep, having been a part of Hansen’s first band Gentry in the early 80’s, then as one of the Guardian’s famed chorus-choir vocalists in the early 90s. So yeah, the man has done a thing or two.

Rise of the Hero is Iron Savior’s eighth album, and first in three years, combining all the familiar traits of tried-and-true Teutonic power metal of the muscular variety. So while the band comfortably stays away from the double-bass barrage that BG and Helloween popularized, the heroic choruses are in full-flight, like on “Last Hero” and “Revenge of the Bride.” Sielck’s vocal approach is best described as a take-off of Hansi Kursch’s, just without some of the tonal elaboration and fluctuations, so while some of his choices are predictable on “Thunder From the Mountains” or “Dragon King,” they’re exactly what one would want out of power metal of this variety.

The cover of Mando Dias’s’ (who?) “Dance With Somebody” is far and away the only track of the questionable variety on Rise of the Hero, the rest stays within the general German confines, albeit without much adventure. Then again, such moves are expected from a band like Iron Savior and a lad like Sielck, whose vocabulary of this style ranks among the most decorated in the scene. “Far From Beyond Time” should sum all it all up nicely anyway…