Iron Man – South of the Earth (Metal Blade/Rise Above) 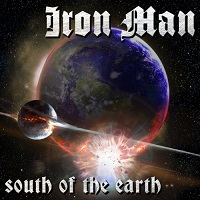 The background on Iron Man is this: They were originally a Black Sabbath cover band (hence the name), who formed in 1988 only to come around to writing their own songs. They are guided by guitarist Alfred Morris, who shares the same name as Washington Redskins starting running back, Alfred Morris. Lee Dorrian from Rise Above Records/Cathedral thinks they’re cool, and digs Morris’s guitar tone. And South of the Earth is their fifth album in a career filled with plenty of stops and starts.

Given the band’s label home and moniker of choice, it doesn’t take a brain scientist to figure out the direction of South of the Earth. Playing a 70’s-tinged brand of stoner metal, Iron Man lack identity in the present context, for the year has simply ballooned with bands paying homage to the 70’s and the glory that is Iommi’s riff bag. And yeah, Morris has some rather groovy riffs to boogy to, like “Hail to the Haze” (gee, what’s this song about?) the fuzzy “The Worst and Longest Day.” Heck, even a short acoustic guitar instrumental appears in the form of “Ariel Changed the Sky,” so maybe Iron Man isn’t really done being a Black Sabbath tribute band. They just do it all stealth-like. Or not.

The vocals of “Scratching Mad” Dee Calhoun are authoritative and a smidge John Fogerty-like, so that’s how South of the Earth eventually bagged a positive review from DR. This stuff is all retro and not even mindful of presenting something new, yet we all know how nostalgia works, and if a guy like Lee Dorrian is feeling it, then I guess we will too.