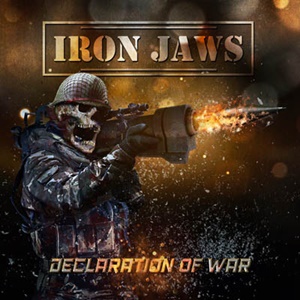 Intertwining a combination of heavy metal and speed influences from the 80’s, Iron Jaws from Italy are a five-piece outfit who have been producing their style since 2006. Issuing two albums to date with the independent debut in 2010 Louder Is Not Enough and the Pure Steel follow up from 2013 Guilty of Ignorance, the band has been dormant for seven plus years. Declaration of War as the key third album could vault them up the ranks – or relegate them to a niche audience. After a few passes, it’s obvious that a primal sound that features stock influences from Exciter, Overkill and that early/mid 80’s era carries the weight of what you’ll hear bursting from your speakers on these eleven originals (plus special ‘era’ cover).

Considering a third of the songs have ‘metal’ in their title (“The Hell of Boiling Metal (Big Trouble in Chinatown” and “Horns Up for Metal” standouts) it’s no secret what you’ll get here. Lots of razor wire guitars, pounding drums of a semi-speed/punk-oriented variety, an elevated bass to match against the guitars and the roaring screams plus gang vocals to supplement the lyrics and key verse/chorus passages. Occasional references to the NWOBHM movement creep up here and there, against the sideways quick hitting licks and double kick pummeling for “The Brawl” as well the beginning evil musical bass/guitar interplay for the otherwise speed monster “Idiots’ Prophet”. If you are familiar with the albums Violence and Force, Heavy Metal Maniac, and Feel the Fire, Iron Jaws executes a lot of their songs in a similar fashion – although the vocals of Mixy have a bit more of that Exciter/sandpaper bite than anything remotely Bobby ‘Blitz’ Ellsworth-oriented. Acceptable for sure, but nothing glamorous or exciting – the solos for many songs are just there and nothing to write home about (check “Back on the Hunt” here), and you just get the sense that Iron Jaws sit in a specific niche without really doubling down on a critical, riff to riff, song to song distinctive outlook.

And kudos for putting “Ton of Bricks” from Metal Church’s second album The Dark on this – unfortunately, they don’t take into account the unique voice of the late David Wayne and stellar guitar interplay that makes this song special. At best Declaration of War may appease the faithful cult followers of Iron Jaws, but few others.