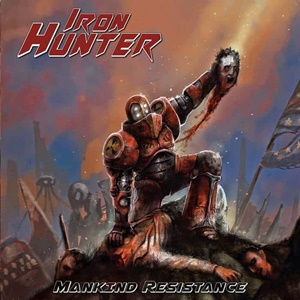 Chances are, band monikers give listeners a glimpse into style expectations – especially if you have been in the metal realm longer than a decade. Iron Hunter from Spain stand tall in a basic heavy/harmonic power landscape for their debut full-length Mankind Resistance. Originally known as Starlight for a year, the quintet has only issued a 7” limited edition single through Underground Power prior to signing with Fighter Records – the b-side of which “Killing Machine” appears as a bonus track for this release. Although not privy to much background information, the ears and eyes tell all you need that a love of headbanging riffs, harmony-laden accents, and high-pitch vocals plus science-fiction/ fighting themes lyrically tie together for a quick hitting nine song affair.

The space-suited warrior standing over his victims while hoisting a head in one hand for the cover gets the blood pumping – and four songs in “The Deathbringer” will continue to elevate adrenaline production through its speed riffs, relentless double bass, and searing Maiden-esque leads in that old Teutonic speed metal meets Riot/Thundersteel template. For the most part though, Iron Hunter favor an Accept meets Judas Priest-oriented mid-tempo riff parade, the type of chugging foundation that allows Emi Ramirez to sit in his lofty, bird-call vocal shriek zone to make “Save the World” and opener “In the Heat of the Night” standouts. The bass/twin guitar cultural nuances to instrumental “Starchaser” again will promote Iron Maiden similarities, a rallying cry for the audience should the band choose to inject this as a live staple. Some may feel that Emi’s enunciation issues for certain English words can weaken the impact of a track like “Blood, Fire & Steel” (the latter word coming off as a nasally ‘steaaal’), and overall this scribe was hoping for possibly a strong guitar tone, but overall this is still quality material for those who love that traditional US meets Teutonic metal that makes devil horns mandatory in approval.

If names like Riot, Enforcer, Accept, and Judas Priest matter to your world, Iron Hunter and Mankind Resistance can be quite satisfying to consume and consistently return to.