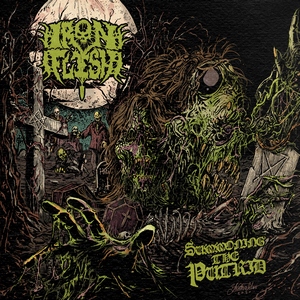 Venturing back quickly into the fray after last year’s Forged Faith Bleeding, French death metal squad Iron Flesh are here with their sophomore full-length in Summoning the Putrid. Last year’s HM-2 infused debut hit hard, without forgetting the melodic touches. The same can be said for the follow-up, but it can also be stated that the band has made some steps up in songwriting and veering from the SweDeath norms.

It’s clear at the first second that the HM-2 guitar sound isn’t going anywhere in the band’s repertoire, but some kudos are definitely deserved with this second act. “Death and the Reaper’s Scythe” is an 8-minute epic on the second half of the album that opens in a more doomy fashion, as the band takes their time accelerating the pace, squeezing in as many melodies as they could before moving into a mid-tempo stomp. The track has a great sense of pacing to it, even while sticking to the mid-tempo for much of the runtime. The amount of melodies alone makes it a strong piece, and the later bits of doom-y stuff in the second half further increase this aspect. Closer “Convicted Faith” also plays the doom hand a bit too, focusing on a melodic trudge that works well as an epic finale. Even the more traditional death metal tracks capture this at times, such as “Incursion of Evil” and it’s melancholic lead to start things out, or the churning riffs of “Demonic Enn.” That said, the buzzing guitar base still stands, and the one-two opening of “Servants of Oblivion” and “Relinquished Flesh” are as frantic and fun as any other act that you’ll find in the genre.

Iron Flesh nicely steps up with Summoning the Putrid. The death metal elements are just as fun as before, and the even stronger emphasis on melodies and doom-y injections make them a bigger force to be reckoned with. One to look out for if you want some retro death metal that is starting to color outside the lines.