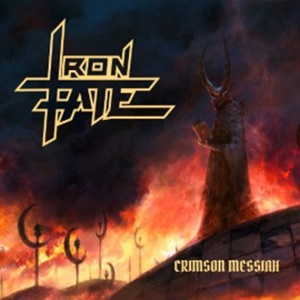 This German outfit has been around since 2005, yet only released one album in 2010 with Cast in Iron prior to this second full-length Crimson Messiah. The quintet possesses a sound that crosses paths with traditional, power, and thrash elements – one that rivals many of those standout artists from the 80’s and 90’s that made their mark from US and European shores. Considering this is my first foray into their material, it’s quite a potent reminder that often gems can still be discovered when least expected – as the songwriting, performances, production, and overall quality for these nine tracks (ten including the bonus cut) will make most metal mavens stand up and take notice.

The guitar playing has a rich, harmony-laden quality that stands alongside the Iron Maiden, Judas Priest, and Queensrÿche mold of twin axe attacks – check out the main riffs and lead parts for “Crossing Shores” or “Hellish Queen” for those electric volleys of splendor. When wishing to stretch out their musical chops and develop an emotional arrangement full of acoustic guitars and tender, lower register melodies and incorporate this into a moving ballad, look no further than the almost ten-minute masterpiece “Strangers (In My Mind)”. The song portrays a similar atmosphere to the great work of Metal Church or Crimson Glory, changing into a galloping affair at the six-minute mark where the instrumental transitions blaze as a progressive thrash feast for all. Another standout aspect must be the fierce, mesmerizing metal voice of singer Denis Brosowski. Nicknamed ‘Iron Ivan’, he has such amazing control and sustained note holding propensity, from the lowest to highest, piercing screams – think Midnight of Crimson Glory, Geoff Tate during his early to mid-80’s prime, and John Arch rolled into one when you hear his tremendous work within “Guardians of Steel” (an ode to the genre we love) and the opening title track adventure. The extra layers of vocal harmonies, seasoned band logo, guest appearances including Harry ‘The Tyrant’ Conklin of Jag Panzer for “Crossing Shores” allow Iron Fate the chance to position themselves high in the hearts of classic metalheads worldwide.

Let’s hope we don’t have to wait another decade for the third album from these Germans. Crimson Messiah has that US metal power meets European sophistication and grace that all old-timers yearn to hear again.