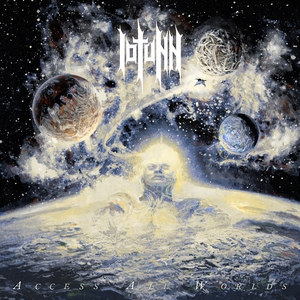 Just as the name would imply (old Norse for “Giant”), Iotunn deliver a massive debut with Access All Worlds. Jón Aldará (Hamferd, Barren Earth) sits at the vocal position while a progressive and expansive musical playing field unfurls all around him. The perfect scenario for those in need of an adventurous musical journey that isn’t content to stick to the conventions.

At first listen, Access All Worlds can be a bit daunting. An hour in length, and with only seven tracks – this isn’t one that is going to be readily accessible. There are some moments for sure, but considering the storytelling and way the music wraps around, it’s an experience that is more suited for a beginning to end listen to fully appreciate. Each track feels like a voyage in and of itself, but it does combine into something far greater. The band’s use of different moods, melodies, and atmosphere is what allows these longer tracks to really take off. The title track, for instance, sits in a more melancholic state despite some heavy sections that utilize a more frantic tempo and growled vocals to surround more dreamy and melodic ones. On the other end, the shortest track “Laihem’s Golden Pits” is near raging at points, complete with spiraling riffs, blastbeats, and angry roars, only tempered by some more direct power metal-esque moments. Aldará’s clean vocals can be quite poignant, like on “The Tower of Cosmic Nihility,” and give the tracks a more unique feeling when coupled with the vast number of shifts in musical tone – from gloomy to triumphant to anger – there’s a really unique feel to how the vocals and musicianship align to create something stronger.

Access All Worlds takes the listener across a musical trip through the stars. The emotions and atmosphere are always rich in tone, and the music is an absorbing listen that gets better with successive listens. Iotunn have a masterful skill at this for such a new act, and many are bound to stand up and take notice at their potential moving ahead.