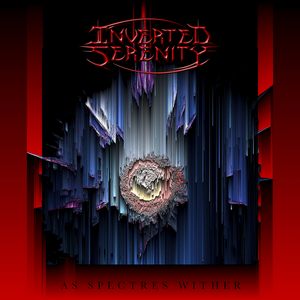 From the land of crazy and sometimes completely over the top tech death (we speak of Canada of course) comes Inverted Serenity. And while they might not make your head explode from the combination of speed and tech, they will keep you guessing as the album unfolds. As Spectres Wither is quite the eclectic mix of extreme metal styles.

While it certainly screams death metal when you hear it, there’s much more to the sound of Inverted Serenity. They keep a progressive mindset in many ways – a variety of textures and feelings (outside of the usual bludgeoning and aggression) light the path. There’s clean guitar and darkly atmospheric moments, clean vocals, heavy grooves, thrashy riffing, and of course, some moments of tech-y infused craziness (all of which can occur in the same song, such as “Mechanical Gods”). It’s done in such a way that, while still cohesive, is going to make you wonder where the band will go from song to song. The band has the chops to back it up too, with melodic hooks leaving just as much of an impression as some of the more bruising grooves and intricate riffs. If there’s one minor complaint, it’s that some of the songs simply feel like they linger for longer than they should. With a number of tracks approaching and exceeding 6-minutes (“Lunar Candle” hits 9-minutes), it feels like there are some lulls in between some pretty strong and intoxicating moments. A little trimming could go a long way in this area.

While some tracks may go a bit long, Inverted Serenity are a band that has plenty of ideas and will keep you guessing throughout As Spectres Wither. The eclectic make-up is a definite plus, and should help them find a name for themselves within the progressive death metal world as they soldier on.