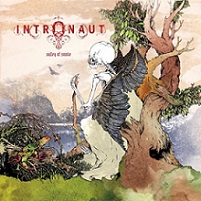 Often buzzed-about, California’s Intronaut have been coddled by the metal press, who often claimed these guys were the next logical step from Isis and friends. ‘Tis hasn’t quite been the case, as their 2008 Prehistoricisms album failed to live up to expectations (at least Blistering’s expectations), rendering these guys a mere footnote in the metalgaze race. However, significant progress abounds on Valley of Smoke, which is the spacey, melodious, and well-honed album many knew the band was capable of.

Previously, it was readily apparent Intronaut was too willing to cling to the boomy Mastodon/Neurosis sound, thus prompting their songs

to have little gusto, but on Valley of Smoke, there’s an increased dependency on melody, which makes all of the difference in the world. Adding to that is the clean vocal approach of Sacha Dunable, who may not have remarkable range (or even a remarkable voice for the matter), but sings

cleanly in all the right places, specifically during the winding portions of “Above” and “Core Relations.”

on both songs (drummer Danny Walker is a tyrant on the skins). It’s this serve-and-volley between the gruelling metallic front of old, and the vastly improved melodic happenings (just check out the 1:12 mark on “Sunderance” for what is probably the album’s finest moment) that ultimately makes Valley of Smoke a multi-faceted, above standard-fare album.

Tool’s Justin Chancellor lends his superlative bass skills to the closing title track, but by then, Intronaut has established solid footing. Valley of Smoke is clearly one of the year’s better metalgaze albums, falling just a bit short of Rosetta’s A Determinism of Morality. Still, the band’s obvious growth and willingness to cater to its now superfluous melodic side should bring great tidings down the road. Heck, they might even earn all of the heaping praise they’ve been showered with.