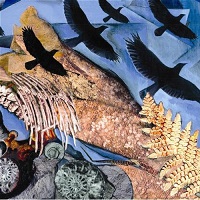 Considered by many to be the band that holds up the progressive end of the metalgaze spectrum, Intronaut are still hovering around that area of proficiency manned by Isis, Cult of Luna, and Mouth of the Architect. 2006’s Void was a thorough effort, as was last year’s The Challenger EP, but Prehistoricisms isn’t going to be the album to vault Intronaut into that group.

The band certainly has more pop than its contemporaries, evidenced by the throttling “The Literal Black Cloud,” but when a metalgaze band goes that route, they end up sounding like a watered-down Mastodon. “Cavernous Den of Shame” stays in tune with the band’s prog angle, with sideways, dissonant riffing and some cool bass rumblings.

Where the band should be headed is in line with the title track. Boasting tribal drumming and quasi melodies to meld with some grueling riff action, “Prehistoricisms” is evident of the talent contained within Intronaut (they did come from bands

such as Anubis Rising, Exhumed, and Uphill Battle, if that matters). When the spiraling Isis-like melody makes it way through the mid-section of the song, you have to wonder why more of this isn’t explored in conjunction with the band’s considerable prog-tendencies.

Closing with the five-part instrumental “The Reptilian Brain,” Prehistoricisms sorta just wimpers out at the end, lacking the sonic boom and thrust we’re used to hearing from Isis and Lost Along the Highway-era Cult of Luna. Hard acts to follow, yes, but Intronaut can do so much more.